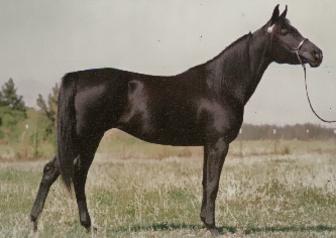 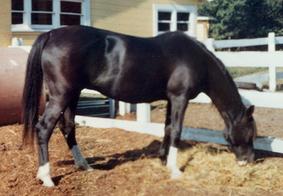 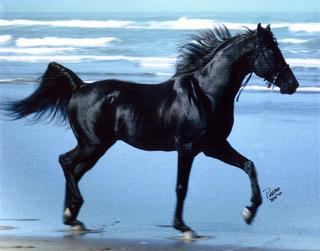 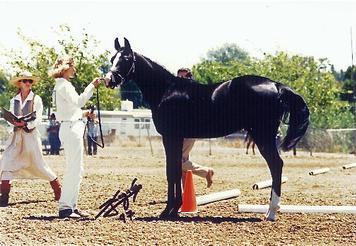 “Meg” winning his first championship as a yearling

I bred and raised Arabians with the emphasis on versatile, sport horse disciplines and eventually obtained Bimilah, a black Arabian mare, that began my black line of sport horse Arabians. From this mare, and by Malabar King/ Prince Ebony, the stallion, Amir Fahim+ was born. This 15.2 hand black stallion was a superb endurance horse, among his many versatile talents, and produced many award winning sport horses.

1970 saw the beginning of Kerrigan Bloodstock with the purchase of five
acres in the area known as Freshwater near Eureka, CA. Though I, Elaine Kerrigan,
had been involved with horses for several years, this is when I acquired my first Arabian broodmare.

Ultimately, the “golden cross” was begun when I purchased the *Adhem daughter, Amyrah Adhemah. Amir Fahim+ and Amyrah Adhemah produced exceptional Arabians for the sport horse world and this is when I started advertising “Arabian Sport Horses” years before it became popular.

In 1995, Amir Fahim+ passed away, but Amyrah Adhemah was carrying their last foal. This colt was born into my arms on 4-11-96. Four months later, Amyrah Adhemah passed away leaving me with the best colt I had ever produced. It was fitting that this colt be named “Omega” since he was the last of this “golden cross”.